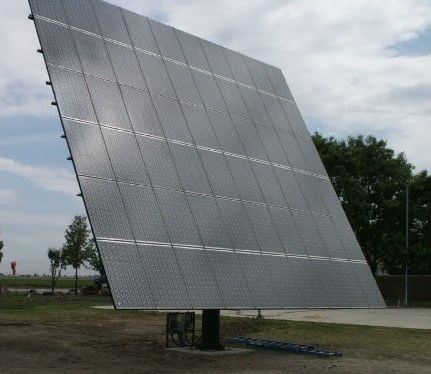 The stand-alone solar tracker software, is designed to operate a single dual-axis or two single-axis solar trackers. It is based on the CX3 platform and packaged with a set of software modules to make it a complete solar tracker controller solution. It may operate in a field of other SCX managed trackers; however, each unit is operated and managed individually.

Tracker Targeting: The solar position is calculated based on the geographic location and time of day. With a known solar position, the tracker target is determined based on criteria such as optimum solar while maintaining tracker operational limits.

Operational Aspects: When the Sun is below the horizon, the controller will move the tracker to a configurable stow position. In areas with snow conditions, this position is set at an angle where snow-buildup would be minimized, while in non-snow locations a more horizontal position is usually preferred.

Wind Handling: The tracker controller will typically operate with the input from an anemometer which is used to detect high wind-speeds. Three wind-speed thresholds are defined for safe tracker operation:

Once a storm condition has been triggered, the tracker is brought to a predefined storm-position, by moving elevation first, followed by azimuth – if permitted.

Fault Handling: Errors can occur in electro-mechanical systems, and the SCX incorporates a configurable Fault Handler for how to automatically recover, or in case of failure, in which state to leave the non-operational tracker.

Local Control: Two additional input methods can be enabled for local control. One is the Clean/Storm mode switch used to force the tracker to the pre-defined storm-position or clean-position. The other is the loss of AC-power input which will force the tracker to storm-position and cease operation until AC-power has been re-established. The controller may also be connected to an energy meter – used to measure performance of the local PV system.

Networking: The SCX stand-alone controller may operate autonomously without use of a network/Ethernet connection, or it may be connected to the Lauritzen Valhalla server for remote monitoring and control. TCX2 includes both a local webserver for monitoring of tracker status and iPhone interface to help field technicians during installation.