For solar trackers to be a worthwhile investment, they must demonstrate to be long term reliable and with minimum maintenance.

Early solar trackers used an optical positioning method. Such a sensor is fully exposed to UV radiation which makes any plastic housing brittle with subsequent failure from weather.

Moving a tracker to a desired target can only happen with a reliable position feedback system. For trackers using the calculated targeting method, the feedback system is typically one of the following:

Sensors like inclinometers, encoders, and limit switches can be mounted such that they are protected from UV radiation, and weather. However, they do require an advanced control system. 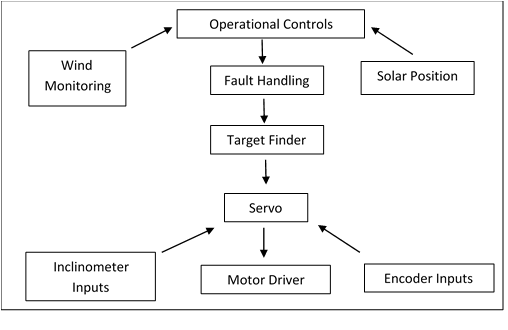 A state of the art solar tracker controller incorporates a set of basic software modules for tracker operations. At the executive level, the Operational module considers environmental conditions such as wind, and current solar position to dispatch a tracker target command. The Fault Handler module accepts the target and acts as the supervisor for the servo module which task it is to move the tracker to its target.

There are two methods commonly used to control solar trackers: 1) optical sensing and 2) calculated sun position. Optical sensing mechanisms only work if the skies are clear, and do not perform well if the sensors become dirty. They commonly use analog electronic circuitry; hence they cannot be controlled remotely. Controllers based on a solar ephemeral equation typically calculate the solar position to 0.01 degree. During early morning and late afternoon, some solar beam deviation will exist due to the atmospheric water vapor deflection, amounting to as much as 1-2 degrees.

Solar tracker positional feedback is typically done through the use of encoders, limit switches, or inclinometers. Motor mounted encoders are typically most cost effective, but also introduce inaccuracies caused by the mechanical gears. For those systems, the gear slop can easily reach +/- 1 degree. Another variable is the tracker platform itself, such as bearings or the ductility of the construction materials. Long term failure rates for encoder-based systems can also be higher than expected due to fouling.

How Important is Accuracy?

In the case of using PV modules, the modules are not particularly sensitive with respect to the incoming solar beam. For instance, a solar tracker that is consistently off by 2.5 degrees is operating at 99.9% of its optimal output. Similarly, a tracker operating at 10 degrees deviation from the optimal solar beam will operate at 98.5% of the optimal output. Thus, it should be apparent that constructing a PV solar tracker with emphasis on accuracy may yield a poor value proposition. The table below shows this theoretical relationship:

During the winter at noon time at middle latitudes the apparent motion of the Sun can be on the order of 2 to 3 degrees every ten minutes, while during the summer, the movement can be as great as 10 degrees. For PV based trackers, it is generally a good idea to minimize motor starts and stops to promote longevity of the electro-mechanical systems. Such algorithms will consider both a movement time interval and minimum angular adjustment.